Ella was born on the 31st March, in Germany. She shares her birthday with Henry II of France, Rene Descartes and Olli Rehn. She has a claim for citizenship of Australia, Austria, Germany, Ireland. She could live and work in over thirty countries, without impediment.

She will likely speak four or five languages, have friends and colleagues spread throughout the world. She can expect to travel widely and have the benefits of a liberal democratic upbringing. She will face the perils of social unrest, health issues, personal problems, and Acts of God, but she will be well equipped for these, having many personal, family and governmental resources to assist her. 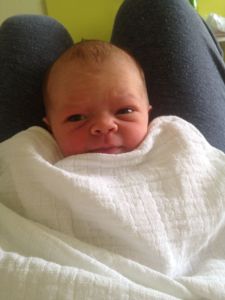 Excepting war and plague, she will have a very good chance of living to the 22nd century, when her grandparent’s youth will have slipped from Modern to Ancient History. Her life will be measured, calibrated, photographed and recorded in every moment. Distance will not impede her communications, and location will not define her. Privacy and solitude will be art forms for her.

She already carries the heavy responsibility of the promise that we as a society vest in her. The promise of a brighter future and a better world.

The world ahead will be exciting, challenging ever-changing and totally unpredictable. The rapid and accelerating societal changes of the last twenty years will be multiplied exponentially. The society she will grow old in would be as strange to us, as New York would be to Amazonian Indians.

But there will be stability as well. While we cannot fathom the technological, medical or societal changes to come, we can see in retrospect that the spirit of humanity, personal values and the basis of personal relationships have not changed over the centuries, and are unlikely to in the future.

What we have to hope for and strive for is a society that bases it’s policies on human values, and not on material or totalitarian values. What she needs is a society that will allow her freedom, and the ability to achieve her potential. These are values held as self-evident in the American Constitution, but realised in their fullest in Europe today.

This is a Europe that strikes the balance between materialism and liberalism. A Europe that allows material entrepreneurship without oppressing personal freedoms. A Europe that declares high aspirations, and strives to achieve them. A Europe that defines itself in the 21st Century by aligning itself constantly with democratic ideals and rejecting oligarchic values, wherever they are found.